“Going into 2018, the stakes for CEOs have jumped dramatically in how they manage people,” says Stephen Miles of The Miles Group (TMG). “Boards and investors are pressuring CEOs not only to set the right tone at the top, but also to make sure talent throughout the organization is completely aligned both in performance goals and in cultural fit. But many companies, if they are not already in the middle of one, are on the brink of a talent failure – and they might not see the mistakes that got them there.”

TMG – which advises CEOs and top executives of Fortune 50 companies on improving talent – identifies 10 talent mistakes that will cause the most pain in 2018: 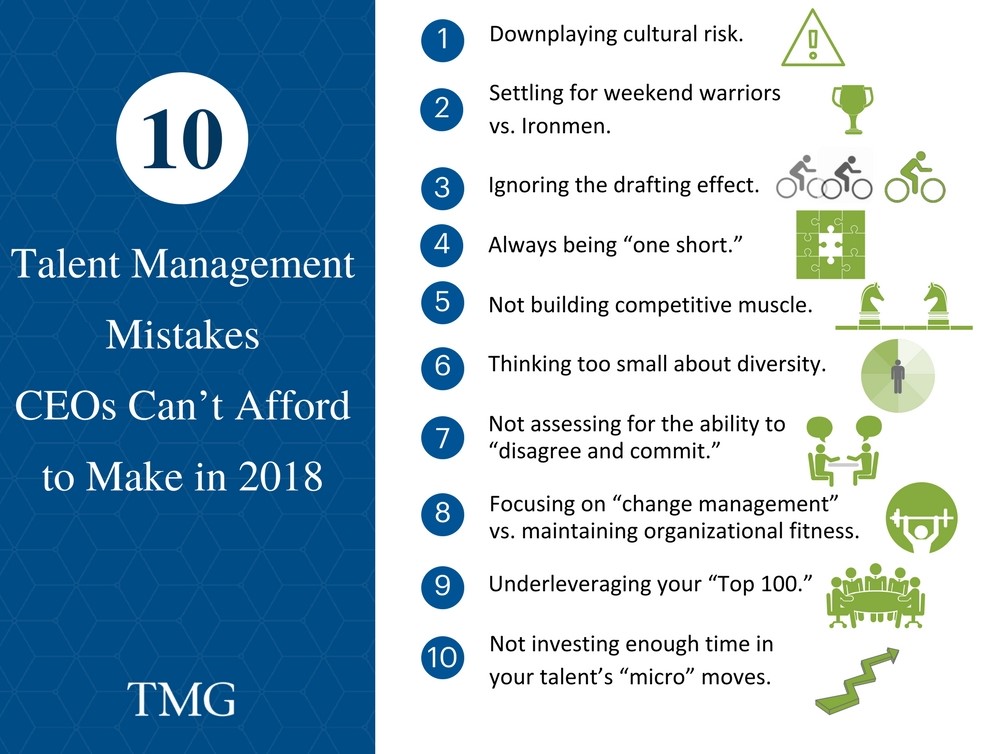 1. Downplaying cultural risk. “Shareholders, the media, and consumers – not to mention regulators and prosecutors – will only increase pressure on companies to take a hard look at their corporate culture,” says William Stern, managing director at TMG. “All C-level officers and board members – not just HR – are going to be held accountable for how a company’s culture plays out in both official and unofficial ways, and will need to mitigate the cultural risk that could damage the organization and shareholder value.”

2. Settling for weekend warriors vs. Ironmen. “It used to be that if you had an executive coach, something was wrong; today, something is wrong if you don’t have a coach,” says Taylor Griffin, chief operating officer of TMG. “Effective leadership development is an Ironman activity – it takes continuous commitment and constant improvement. Treating it as an intermittent activity won’t give people the results needed; companies must identify the truly coachable talent who want to do the hard work of development.”

3. Ignoring the drafting effect. “Strong executives in a leadership role can often lift the performance of their team, causing people to believe that the whole team is equally talented and capable,” says Matt Bedwell, managing director at TMG. “Unfortunately, this often doesn’t hold true. When that leader moves on and someone else from the team steps into the role, there is a chance that person will fail – much to everyone’s surprise. It’s critical to unbundle the drafting effect by getting very specific in your diagnostics of the leader to see where he or she could be pulling the weight of others.”

4. Always being “one short.” “CEOs often ask us why, if their company does talent management so well, they are always one short when it comes to finding the right person for an open role,” says Courtney Hamilton, managing director. “Simply having a talent management process in place can instill a false sense of security about one’s bench – it’s necessary but not sufficient. Companies often waste time trying to fix what’s broken when they should be investing in their highest performers and grooming them for future roles.”

5. Not building competitive muscle. “As growth slows in both the U.S. and abroad, companies can’t wait for the economy to lift all ships,” says Miles. “They must grab market share from competitors in order to grow. Given that there has been such a focus on cost-cutting over the past decade, to the near exclusion of other priorities, there is only a small subset of executives who are willing to really get scrappy and do what it takes to take share.”

6. Thinking too small about diversity. “The highest performing teams are often diverse, but the lowest performing teams are often diverse, too,” says Griffin. “Leaders may not have the tools to lead diverse teams, and team members may not be able to express themselves in a way that allows for both a cultural fit and their unique differences. Diversity must be broadened beyond identity diversity – gender and ethnic differences – to include cognitive diversity, which expresses itself through different personality types or leadership styles or the way people think about solving problems. Companies need this full-spectrum diversity to drive growth.”

7. Not assessing for the ability to “disagree and commit.” “Lack of agreement from a team member isn’t a problem – but a lack of commitment is,” says Stern. “Not everyone can agree on every course of action. People need to be willing to have their air time on a topic, and, if it goes a different way, they need to be able to disagree but still commit 100%. A leader must be assessing the team members’ individual abilities to ‘disagree and commit’; if there is any evidence to the contrary, the leader needs to step in immediately for corrective action.”

8. Focusing on “change management” vs. maintaining organizational fitness. “When times are good, companies typically get undisciplined about improvement and ‘put on a few extra pounds’ – success covers up a lot of sins,” says Bedwell. “Then, when hard times hit, executives embark on ‘change initiatives’ at which they are unpracticed – and start changing things that are actually working, compounding the problem. Instead of this cycle of gaining a few pounds and then frantically working them off, companies have to maintain ongoing organizational fitness. Building this fitness into your corporate DNA gets you away from project-based change and makes it part of your corporate culture.”

9. Underleveraging your “top 100.” “CEOs frequently underutilize the top one hundred people in their organization as tools for communicating the vision of the company,” says Miles. “The three layers – a CEO’s direct reports (typically the top 8-11 executives); the next level of direct reports (another 20-30 executives); and then those who fill out the top 100 in a company – are where a CEO can create leverage of inspiration, influence, and alignment. Engaging all three layers by connecting them and their roles to the overall strategy of the company has a dramatic impact on the broader organization. They are the ones who will cascade the strategy and get more people aligned to drive the strategy forward.”

10. Not investing enough time in your talent’s “micro” moves. “Managing talent has traditionally focused on helping direct reports with their ‘macro’ moves – how they are going to make the significant career moves that will pave the way up the corporate ladder,” says Hamilton. “But focusing on these big moves with new titles ignores some of the most important work of their career, such as being given opportunities to present to the board, lead a key meeting for the company, or lead a big project or initiative. It’s critical to help your talent make these continuous ‘micro’ moves that will aid their development and allow them to truly grow into roles.”

Want to be the first to know?