Beyond Covid: What’s Top-of-Mind for the World’s Most Senior Leaders?

“We are heading into a hyperinflationary world, and there are very few people in any company who have ever dealt with inflation of this magnitude before,” says Stephen Miles, Founder and CEO of The Miles Group/TMG, which advises top CEOs and boards globally.

This, and other issues – in addition to Covid – are top-of-mind for the CEOs, C-Suite executives, and Board members he advises, says Miles. 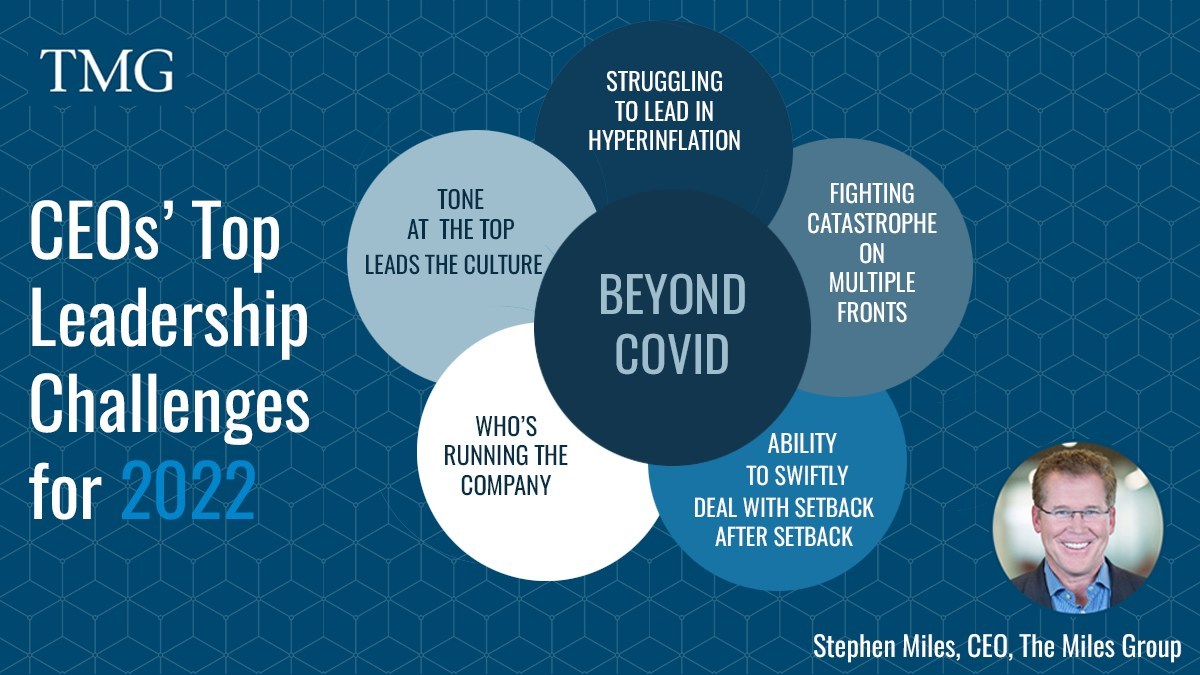 His list of the Top Leadership Challenges for Board Directors, CEOs, and C-Suite Executives includes:

“Most companies are way behind the curve on operational excellence and taking pricing actions as it relates to hyperinflation. The senior-most leaders in the world now need to be anticipating – both for themselves as well as their organizations – the sort of leadership requirements needed to lead in a hyperinflation world.
“Hyperinflation is not a ‘one and done’ thing and many executives are responding to it with a ‘one and done’ mentality, which is to work on operational excellence and take some cost out. BUT that is not enough: you have to take price again and again and again. This is how the virtuous inflationary cycle begins, and it is very hard to break out of it!
“The combination of ‘weak signal detection’ and agility of action is a critical skillset for dealing with hyperinflation. Control what you can control, and do it early! Today Wall Street is rewarding those companies and leaders that initiated on a weaker inflation signal, and aggressively took price early. They got ahead of the curve, while those who are behind the curve are being punished.”

“For the last 20 years, if you were a leader you might have had one catastrophic event (think Tylenol). It was a one-time occurrence, a tidal wave that came over the bow and you were judged on how well you did responding to it.
“Today it’s just totally different. Leaders are facing a multiplicity of small to large scale crisis to catastrophic events every day. You literally are fighting a continuous multi-front battle daily.
“So as a CEO, you have to be superior leading through crisis and continuous change. Stakeholder interest is very high, and to lead through this requires a certain sort of calmness and emotional stability, combined with the ability to have the right people around you both inside and outside the company. Pre-Covid, this might have crushed a leader, but today’s leaders must have the ability to handle multiple catastrophes at the same time.
“This is high stakes with high stakeholder interest and many of these decisions are extremely painful to reverse. As a CEO you need to absorb and not amplify while resisting the urge to simply react. This requires someone to turn outward and leverage key advisors inside and outside the company. It requires triangulation and thinking versus simply moving fast.”

“Everyone is talking about organizational resilience, but what that really means is fuzzy at best. We need to redefine resilience. The real determinant will be whether companies have an organizational culture that is primed to deal with multiple setbacks, without allowing themselves to be knocked down or out. If leaders think the setback is the worst thing that’s ever happened, it’s all over. But if their culture is psychologically primed to deal with setbacks, their response to an event will be differentiating and they turn something negative into a positive.
“How can our leaders cultivate a ‘weak signal detection’ capability inside our company, so we get a whiff of smoke before anyone else has seen the fire? And how can we respond to that whiff of smoke in a flexible, fast way?
“When you look at competitive advantage in the future, this is one of the places where it can reside inside a company. It comes down to having a psychological priming in the culture, a pride in the fact ‘we’re doing wicked hard things, and our company is special as it relates to that.’ Setbacks will happen and it will be our ability to respond to them is what will differentiate us.”

“When leadership is focused on crisis to crisis, everyone gets distracted from thinking about delivering shareholder value.
“The CEO job has changed from shareholder value creation to stakeholder capitalism whether you like it or not! The CEO used to just have to think about leadership of the company and management of the board and their external investors and now they must focus on a whole range of other issues. The range of socially responsible activities companies used to do has become the license to operate – the floor, not the ceiling.”

“How do we drive that culture of resilience? For me, it’s tone at the top, cascaded down continually from the CEO to a company’s top 25 to 150 people.
“First, CEOs must project that even if they are knocked down, they can adjust and rally themselves and their teams and the organization – verbally and non-verbally – with calm and ease.
“Next, CEOs need to bring their leadership teams into alignment by sharing context (what are we deciding, prioritizing, and sequencing this week, and why) with them continually. They have already emphasized their purpose and values, but if you want to create hyperalignment, especially in a time of massive uncertainty and multiple setbacks – you need to realize that people can fall out of alignment very quickly, especially when under stress. If you can have weekly or biweekly 30-minute sessions with your top people, you can share information, context, and attitude, to cascade alignment throughout the organization. People really care about what the CEO is deciding, prioritizing, and sequencing week to week.
“And when the people below you have context, they feel empowered, included, and in hyperalignment with the organization – and they then cascade this to all their direct reports, and on and on – a real competitive advantage.”