How Boards Should Handle Outspoken CEOs

In the old days — say five years ago or so — many CEOs were tight-lipped, kept their opinions to themselves
and avoided controversy in public settings. Those days now seem virtually prehistoric. Now boards must
monitor what CEOs are saying publicly and on social media and scrutinize how it affects the company’s
reputation — and stock price.

Take John Schnatter, the outspoken former CEO of Papa John’s, who had very strong opinions on how the
National Football League was treating its players who were kneeling for the national anthem. When he was
overheard on a conference call using a racial slur, which led to tarnishing the pizza chain’s reputation, he was
ousted as CEO.

By contrast, a number of CEOs have provided their personal views on issues of climate change, social
inequality, gun control and gender issues. For example, Coca-Cola CEO James Quincey in 2018 wrote in a
blog post, “If left unchecked, plastic waste will slowly choke our oceans and waterways,” an unexpected take
from a company whose product is sold in aluminum cans and plastic bottles around the world.

Another surprise pronouncement emanated from Gerry Anderson, the CEO of Michigan-based utility DTE
Energy, who described climate change as “the defining policy issue of our era.” He was honored by the Center
for Climate and Energy Solutions with the Individual Climate Leadership Award in 2018 for his efforts in this
area.

Or take the strong stand on environmental issues from the CEOs of Exxon Mobil, Chevron and BP. They
endorsed the U.S.’s staying in the international Paris Agreement in order to reduce climate change, which might
be considered contrary to expectations.

None of these forthright comments contributed to any major viral outbreak on social media. Some might applaud
these CEOs for taking a strong ethical stand on an issue that counters what was expected of them.

Speaking Out
In fact, CEOs who speak out have their enthusiasts. Indeed, a Stanford Graduate School of Business study, “The
Double-Edge Sword of CEO Activism,” written by David Larcker, Stephen Miles, Brian Tayan and Kim
Wright Violich, revealed that 64% of global consumers approved of CEOs’ taking the lead in major issues
rather than waiting for government to take action.

For example, 78% of respondents supported CEOs’ speaking out about clean air or water, while 68% supported
statements on renewable energy and 65% supported statements on climate change. Support for comments on
health care, income inequality, poverty and taxes came in at 69%, 66%, 65% and 58%, respectively.

However, the authors also cautioned that outspoken CEOs can antagonize customers and risk a company’s
reputation. Support among respondents for CEOs’ speaking out on other major social issues such as racial
issues, LGBTQ rights and gender was more mixed, according to the report.

Despite all the hoopla generated over CEO statements and controversies, the study noted that among S&P’s 500
companies, only 28% had CEOs who were known to make public statements about social, environmental or
political issues.

When a CEO makes a strong statement today, “they’re amplified times a hundred. There’s a velocity with social
media that is unprecedented,” says co-author Miles, CEO of the Miles Group, an Atlanta, Ga.-based coaching
and consulting firm.

To avoid controversy over public comments, CEOs “need to be grounded in the purpose and values associated
with the company’s core purpose and values,” Miles says. These comments “reinforce the company’s culture,
people who work there and its customers, so the company stands for something,” he adds. Hence, if a CEO of a
technology company is dedicated to issues of sexual equality and hires a diversity officer who cares about it,
those actions signify that the CEO and the company stand for something, and that’s usually perceived in a
positive way.

Larcker, senior faculty of the Rock Center for Corporate Governance at Stanford University, says that most of
the cases where CEOs take a stand fit into the company’s business model. In Silicon Valley, for example, a
preponderance of CEOs has been rallying around pro-immigration issues because “they need the technical
workers,” so it stems from personal experience and self-interest, he suggests.

Even when there is alignment, boards must weigh whether the CEO’s pronouncements affect the company’s
ability to “attract and retain employees,” which is critical to their mission, Larcker says.

Ralph Walkling, founder of the Center for Corporate Governance at Drexel University in Philadelphia, Pa.,
notes that many CEOs are forceful and assertive, which enables them to ascend the corporate ladder. “They feel
empowered to speak out. From a corporate governance perspective, I have no problems when a CEO speaks out
when it represents the best interests of the firm or shareholders,” he says. Millennials, in particular, often
gravitate to companies whose values mirror their own.

Since one of the board’s most significant jobs is hiring and firing the CEO, monitoring that behavior is part of its
mandate, Walkling suggests. Hence, boards can remind CEOs that speaking out about overtly political issues can
antagonize customers. But most boards recognize that CEOs aren’t perfect, sometimes over-express, and may
need an occasional reminder to tamp down their personal viewpoints from a sympathetic board member.

But when a board loses trust about the CEO’s ability to regulate his or her own behavior, then a conflict arises,
Walkling says.

Once a CEO starts speaking out on issues outside of those that impact the company’s business model, the board
must ask whether it wants these actions to take place.

For example, says Larcker, “if the CEO comes out against guns, and all of a sudden you’re alienating hunters,
this can have a real impact on the board’s fiduciary responsibility.”

Setting Boundaries
When most boards tackle these issues, the discussion often takes place in the risk management or audit
committee. The board needs to proactively set guidelines that help the CEO know which areas he or she might want to speak about publicly and which topics might be better left unaddressed. 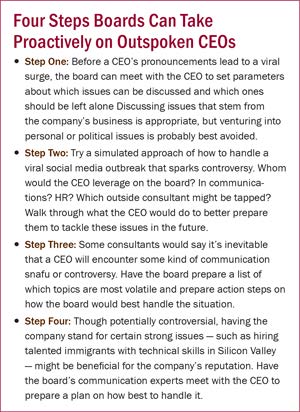 But the problem, Larcker notes, is that too often the board tackles these issues after the fact, when the damage
has already been done and Twitter comments from customers and shareholders, pro and con, have gone viral.
Just as boards set guidelines for money laundering, they should determine specific boundaries for what CEOs
should be able to express and where they should be restrained.

Consultant Miles notes that three types of issues regarding CEO statements tend to predominate: 1) the need for
CEOs to respond urgently when something bad happens, 2) a situation where the CEO initiates a discussion on a
specific topic, and 3) simmering issues that linger, such as restaurants’ dealing with cage-free chicken.

These three scenarios, Miles opines, “pose the greatest form of non-financial risk to a company’s brand and
reputation.” If the CEO is incapable of handling them, it can damage the company’s revenue and future growth
prospects.

Miles recommends that the board simulate a situation to test how a CEO handles these events. Doing so can
build the “muscle” of a CEO to better prepare the leader when a crisis occurs. Once the simulation starts, the
CEO must determine factors such as who on the board would be contacted, who on the board can offer help and
assistance, what communication assistance they can tap, and which communication specialist can be hired.

Finally, Miles notes that the issue of CEOs’ expressing themselves publicly is complex and ambiguous, with no
easy solutions. But he emphasizes that the board must learn to accept the consequences of the CEO’s speaking
out, because “there will always be a cost, and that needs to be OK.”

Agenda is a copyrighted publication. Agenda has agreed to make available its content for the sole use of the employees of the
subscriber company. Accordingly, it is a violation of the copyright law for anyone to duplicate the content of Agenda for the use
of any person, other than the employees of the subscriber company. An Information Service of Money-Media, a Financial Times
Company