“CEOs are facing a daunting new level of challenges around social media, technology, political standoffs, and stakeholder pressures, says Stephen Miles, CEO of The Miles Group/TMG. “How a CEO acts and reacts around these challenges and crisis events today – and gets the company on board around the changes necessary – will be the moment of reckoning for a company’s survival.” 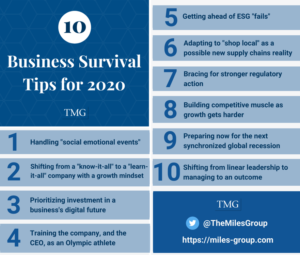 “The person in the CEO role today is very different as a whole from 10-15 years ago,” says Miles. “The innumerable challenges and crises that arise more quickly each day are forcing CEOs to adopt a new skill set and a new mindset.”

Below are 10 factors Miles and his colleagues at TMG have identified as essential focus areas for CEOs entering 2020. TMG’s C-Suite Intelligence podcast series provides additional detail and context around many of these topics and others, providing tips and advice from the TMG executive coaches drawn from years of working with top-level and emerging talent.

1. Handling “social emotional events” “As we move into a ‘social economy’ with leadership actions being scrutinized and judged by millions over social media, CEOs are learning the hard way the consequences of not addressing this reality – and it often translates into their leaving the company. Responding to or taking a stand on today’s ‘social emotional events’ or issues – from plastic waste to the NRA to LGBTQ issues – as well as to a company’s own crisis events requires a new CEO skill set of being able to connect with the public at a completely different level.”

2. Shifting from a “know-it-all” to a “learn-it-all” company with a growth mindset: “The story of Microsoft under the leadership of Satya Nadella is a powerful example of embracing what Stanford psychologist Carol Dweck has identified as a ‘growth mindset’ – and how this approach can save a company. Nadella took the same assets that the previous CEO had and has added more than $850 billion in market capitalization. He has focused on a cultural transformation, moving from the fixed mindset Microsoft had held onto for too long. Under his watch, Microsoft has shifted from a ‘know-it-all’ to a ‘learn-it-all’ company that is open to learning and new ideas. More companies can learn from Nadella’s model as nothing can be taken for granted any longer in today’s rapid business climate.”

3. Prioritizing investment in a business’s digital future: “Digitization of every business has been talked about for the past 20+ years, but we have finally reached the point where this is real. For companies not in the tech space, investing in digital development means focusing on the ‘business of tomorrow.’ Many of them are so focused on winning in the business of today that they risk being late or outright missing the transformation to digital. But getting a company to prioritize digitization is not like Star Trek where a CEO can just ‘Make it so.’ The CEO must make this imperative part of their drumbeat from the top so that it gets the attention and investment required. Digitization requires a real focus and investment in building the organizational capabilities needed for a company’s future success.”

4. Training the company, and the CEO, as an Olympic athlete: “The pattern of a company’s adding some excess during a good run and then shedding the excess when the run was over is coming to an end. Today, many CEOs see their companies as Olympic athletes – where it’s essential to maintain a top level of ‘fitness’ at all times and it’s everyone’s role to stay focused and not allow excess to creep in. CEOs themselves are also prioritizing their own fitness to stay sharp and withstand the physical toll of working in today’s very demanding global business climate with extensive travel, 24/7 communications, and more – a far cry from the wining-and-dining CEO of before.”

5. Getting ahead of ESG “fails”: “The ESG – environmental, social, and governance – agenda for many CEOs has gone from altruism to ‘license to operate.’ ESG is the new normal. With plastic, for example, the companies affected have largely lost the narrative. The story has moved from ‘waste is bad’ to ‘plastic is bad,’ with plastic becoming the symbol for single-use excess. Corporations today need to stay out in front of the narrative before it gets hijacked and then turns their entire business model on its head. It is now sport to shame corporations and build a critical public mass to drive an agenda, so CEOs must stay hyper-attuned to the emerging issues that could pushed by stakeholders anytime.”

6. Adapting to “shop local” as a possible new reality for supply chains: “Most multinational corporations have set up their supply chains to be truly global, but the 25-year business model developed around free trade and the frictionless movement of goods is now under real threat through trade disputes and protectionist policies. Companies are trying to assess whether this is merely a Trump administration blip or a new era of global protectionism threatening their existing business models and supply chains. If this is the new reality, many companies will have to shift their business models to a more local approach, which will cost more and take time to fully adjust. Many arbitrage opportunities around labor and other costs will be lost if companies are limited to more local markets for production.”

7. Bracing for stronger regulatory action: “From heightened privacy concerns around technology companies to the newly appointed CEO of Boeing Corporation saying that the company now welcomes oversight, regulators around the world are finding a new sense of power – supported by a growing populist movement and an increased disdain for the corporation. Taking on monopolies is another area of focus, as the technology space has shifted dramatically in the two decades since the DOJ took on Microsoft, a company far less of a monopolist than what exists in many areas of technology today. We’re likely to see more actions taking on monopolists to either break them up or regulate them with a much heavier hand of the law.”

8. Building competitive muscle as growth gets harder: “Every CEO we have advised over the past decade would tell you that each year has been harder than the previous year to find growth. In a ‘hard growth’ economy, the only way for companies to grow is to take market share from others, but the relentless focus inward on cost-cutting and disciplines such as zero-based budgeting have made it difficult to find executives who have built enough of a competitive muscle. CEOs will need their teams to get out of their more internally focused thinking and embrace a market-based approach that is driven by calculated risk-taking and creativity.”

9. Preparing now for the next synchronized global recession: “Many industrial companies have been feeling recessionary pressures for the past six to eight months, and this is a worry for many CEOs. While the consumer remains strong, there are signs of the next recession being closer rather than further away. The swing card is the 2020 election and the potential for the Trump administration to complete further rounds of a workable trade deal with China. A deal would take a considerable amount of uncertainty off the table and likely extend the expansion for a period of time.”

10. Shifting from linear leadership to managing to an outcome: “Companies are increasingly moving away from the vertical corporation, with its silos and asymmetries of information and linear paths to achieving goals. In today’s highly matrixed organization, executives must also lead horizontally, working with others and collaborating in a way that requires a lot more range to their leadership toolkits. They must consider the direct and indirect constituencies that will influence their strategic objectives. We have moved away from linear ‘Point A to Point B’ leadership – it is now about managing to an outcome.”

“What all these actions have in common is a hypervigilance to external factors,” says Miles. “The always-on, 360-degree CEO who takes in input from everywhere and adapts quickly is the one who will outperform.”